Applications to the Master of Science in Analytics (MSA) degree program increased for the eighth consecutive year—and over 70-percent for the third straight year—bringing the total number of applicants for admission to the Class of 2015 to nearly 800. That’s more than triple the number of applications from just 24 months ago, when the Institute first doubled its enrollment to 80 students. The Institute offered admission to 101 applicants to enroll 85 students in the Class of 2015. With the surge in applications, the acceptance rate plummeted to an all-time low of 12.7-percent, thereby making the MSA NC State’s fastest growing, most-selective master’s degree program.

Founded in 2007, the Institute pioneered the MSA as the nation’s first full-fledged analytics graduate degree. Its growing popularity, both domestically and internationally, is riding high on the crest of a wave of over 50 analytics and data science graduate programs announced in recent years.

“It’s gratifying to see the remarkable success of the MSA, and equally so, the widespread emergence of analytics graduate education,” said the Institute’s director, Dr. Michael Rappa. “Data is the driving force in the 21st Century’s digital economy. We’re noticing large numbers of prospective students seeking to return to school to enhance their ability to analyze large volumes of numerical and text data, to become more effective decision-makers. We also see college freshman, and even high-schoolers, already tailoring their coursework to best position themselves to pursue careers as data scientists.”

From the beginning the MSA’s unique team-driven education and intensive 10-month format, combined with its total immersion in practical applications, has proven to be a winning formula for both rising college seniors and experienced professionals alike. 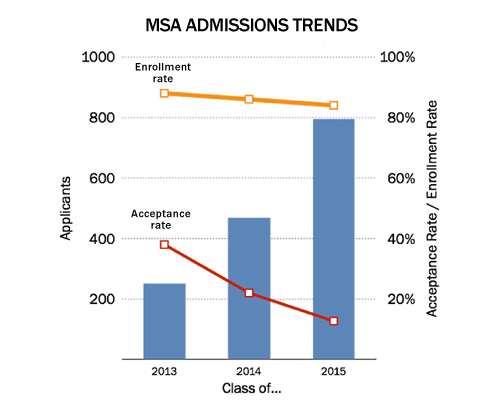