The Institute for Advanced Analytics held its annual commencement exercise for the Master of Science in Analytics (MSA) Class of 2013. Diplomas were awarded to eighty-one degree candidates. The Institute’s director, Dr. Michael Rappa, presided over the ceremony, held at the Raleigh Convention Center, and was joined by members of the faculty and staff and four-hundred guests. It was the Institute’s sixth commencement exercise since its inception in 2007. The new graduates join the Institute’s alumni community, which now numbers 255 graduates. Graduates and their families had much to celebrate with over 90-percent of the class having already accepted a job in the analytics profession. Fast following in their footsteps are 84 members of the MSA Class of 2014. Congratulations and best wishes to this year’s graduates! 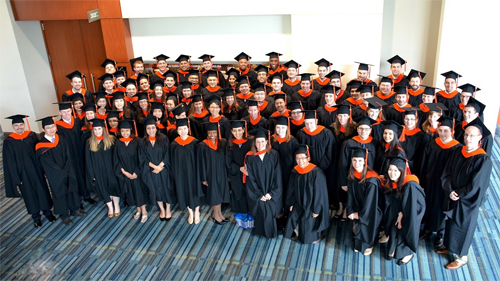