Applications to the Master of Science in Analytics (MSA) degree program increased for the ninth consecutive year—surpassing the 1,000 mark for the first time—for admission to the Class of 2016. That’s quadruple the number of applicants from just 36 months ago when the Institute increased enrollment to 80 students. This year the Institute reviewed 1,061 applications, interviewed 335 applicants, and offered admission to 131 to enroll 115 students. Applications and enrollment grew at the same pace (33%). The Institute is moving into a new facility in June, enabling it to admit the larger cohort. With the continued growth in applications, the acceptance rate dipped to a new all-time low of 12.3%, once again making the MSA the University’s most-selective master’s degree program.

“Selectivity is the mark of a quality program,” said the Institute’s director Dr. Michael Rappa. “It starts with choosing the right candidates, and then having them choose us for their education. It’s gratifying to see the stellar cohort we’ve lined-up. Credit goes to the dedicated staff and faculty who meticulously reviewed applications, interviewed candidates, and identified the very best individuals of the caliber we’ve come to expect. I’m confident the Class of 2016 will live up to the high expectations we have for our students, and I look forward to welcoming them to the Institute.”

Among 110 master’s degree programs at NC State, the MSA accumulated the third largest applicant pool—one of only three with more than 1,000 applications—and the single largest domestic applicant pool for the second straight year.

Founded in 2007, the Institute pioneered the MSA as the nation’s first full-fledged analytics graduate degree. The MSA’s growing popularity, both domestically and internationally, is riding high on the crest of a wave of over 80 analytics and data science graduate programs announced in recent years. From the beginning the MSA’s unique team-driven education and intensive 10-month format, combined with its total immersion in practical applications, has proven to be a winning formula for both rising college seniors and experienced professionals alike. 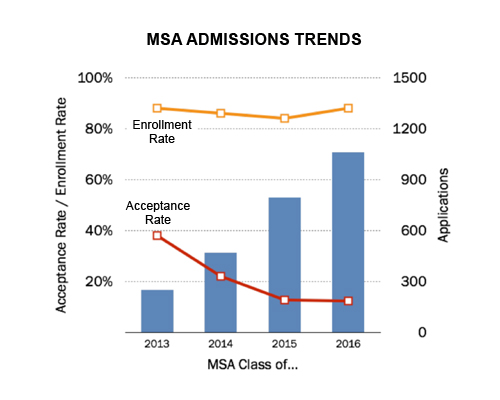